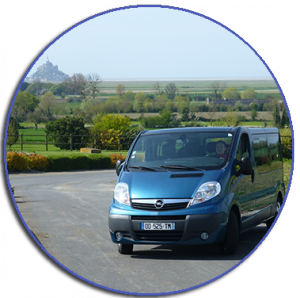 Are you visiting the Mont-Saint-Michel region, and would like to explore the surrounding area?

You can easily go to the East and West each of which has got its charms, using Normandy Brittany Tours’ services. You can hire a guide and a vehicle for a half day (4 hours) or a full day (8 hours).

“Cheops of the Occident, Pyramid of the seas” according to Victor Hugo, the Mont-Saint-Michel is a “Marvel” which stands in the middle of a huge bay.

Classified as a “Historic Monument” in 1874 and as a “World Heritage” site by Unesco in 1979, this major tourist centre welcomes more than three million people a year. Only a third of visitors to the Mount actually make it to the abbey with its many famous steps!

Mt-St-Michel gave its name to the bay of Mt-St-Michel, which is also classified by the Unesco as a World Heritage. The bay of Mt-St-Michel is the theatre of the greatest tidal ranges in Europe. The distance between high and low tide can reach 15 metres during spring tides. The sea rushes back towards the coast “at the speed of a galloping horse,” as the saying goes. 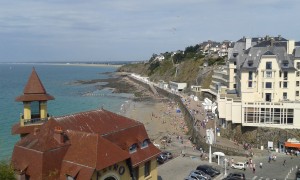 As for the famous “Belle Epoque” villa called “Rhumbs”, it was the childhood house of Christian Dior. It is situated on top of a hill next to the sea. In this unique museum dedicated to the famous fashion designer, you will enjoy a ten years exhibition of fashion models of “haute couture”.

The landscape gardens, laid out by Christian Dior’s mother Madeleine, is one of the rare artists’ gardens of the beginning of 20th that are still being preserved today. Finally, we cannot speak about Granville without metionning its carnival, famous for its spontaneity, its lively and “good-natured” spirit.

To get to this attractive city, the most beautiful road is the coast one. The view at the Bay of Mt-St-Michel from the cliffs of Champeaux is just magnificent.

The major sites that marked our history and are only 1h30-2h from Mt-St-Michel by minibus are the following ones:

After this tour in Basse-Normandie you will certainly be tempted by Granville’s main rival: SAINT-MALO! 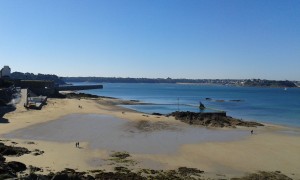 Due to the colour of its granitic houses, it is a “grey city”. Nevertheless it is bright thanks to the emerald of the sea which surrounds it. Its beaches are key sites and water sports are practised there. As for festivals and transatlantic races, they made the reputation of Saint-Malo and get it moving!

The next ’Transat Route du Rhum’ (Transatlantic race which links Saint-Malo with Point-à-Pitre in Guadeloupe) will take place from November 4th. As far as the “Route du Rock” is concerned, it gathers pop rock music stars and new talents every year. 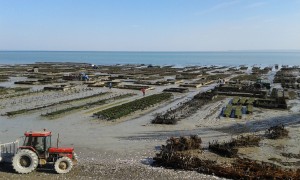 Port of Cancale at low tide

The National Council of Culinary Arts awarded it a special label: «Remarkable Site of Taste» for the quality and fame of its oysters as well as for the tradition of gastronomy maintained by recognized and distinguished head chefs.

Cancale produces annually 5.000 tons of hollow oysters and 1.000 tons of flat oysters. With a pronounced iodine and salt flavour leaving behind a hazelnut after-taste, the oyster of Cancale is a famous dish.

If you come to Cancale, after tasting a good meal, you will have the chance to admire the landscapes and picturesque views while walking on the coast trail. You will also observe the architecture so specific to the port “of la Houle” and to the village, architecture linked to the activities at sea. In the “fish farm” you will see the work of the oyster farmers, the gardeners of the sea. You will also have the possibility to go to the “Pointe du Grouin”, which is a rocky headland of about forty meters high. There, the views of the Mont-Saint-Michel bay are just exceptional. 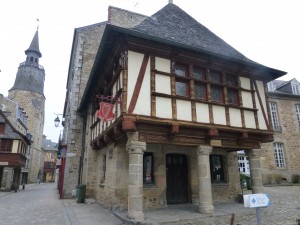 Its Jerzual Street is outstandingly maintained and it became one of the most important centres of attraction of the city. Workshops of former days have been replaced with artists’ studios, craftsmen’s workshops and by restaurants. At the end of the street you can find the Jerzual port full of restaurants with splendid views of the Rance river and the viaduct which crosses it. Dinan is also well-known thanks to celebrities who passed or lived there such as Bertrand Du Guesclin, Auguste Pavie, and Chateaubriand. 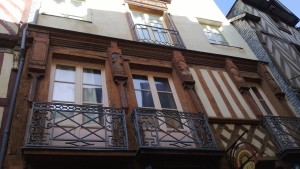 If you enjoy strolling down streets and looking at the architecture, Rennes  is the ideal place. The medieval streets and squares lined with the largest number of restored and coloured half-timbered houses in Brittany are full of character. The city has 2 royal squares and a town hall which were built by Jacques Gabriel. He was the architect of the France royal squares in 17th. In summer it’s surprising to see the illuminations of the parliament of Brittany built by Salomon de Brosse in 17th. And if you want to find a haven of peace away from the busy streets, the Thabor is the ideal park. There right in the centre of the city you can find a rose garden, a botanical space, an English and a French garden.

With about 60 000 students Rennes vibrates all year long through the rhythm of its festivals and fest-noz (classified as immaterial heritage by the UNESCO in 2012). The most famous are respectively the “Transmusicales” and “Yaouank”.